The Obscuratorium is essentially a window Wunderkammer; a mini-museum display that The Paperback Exchange Bookstore has been kind enough to allow me to curate and display at their store. It also represents a new step in my own journey from seeker of curiosities to writer of the weird and wondrous, to creator of a small oddity of my very own. It is the confluence of a few different streams, or themes, for me, which include: recapturing and sharing wonder, the seemingly bottomless rabbit hole of strangeness that is the place I live (Tampa, Florida), and something I participate in every year called GISH (aka the Greatest International Scavenger Hunt).

The idea of capturing and sharing wonder has become one of the central themes in my own story - following the death of my close friend Steve (which I've written about elsewhere in this blog), I set about trying to reconnect with that unique sense of exploring the unknown that we shared as kids. Along the way I discovered a number of resources to aid me in my quest, especially Atlas Obscura, which I began not only using (perhaps somewhat obsessively), but also contributing to. This, in turn, put me on the path to writing #SecretTampaBay (Reedy Press, 2020) and more recently #TampaBayScavenger (Reedy Press, 2021). As I researched and visited the various places to include in my writing, I began to accumulate a fairly sizeable collection of strange trinkets and curios, which were piling up in my home office. Some of these objects, specifically Olga the haunted doll, were objects that my wife would rather we not have in the house, so I began thinking about a better place for them. I was familiar with various window galleries, like Portland's Windows of Wonders and the Windows for Peace in Vienna, so I approached Joaner Hempsworth about utilizing the windows of The Paperback Exchange for such a purpose. Joaner was enthusiastic about the idea and I suggested the name "The Obscuratorium" as an homage to the site that helped kickstart my passion for exploration. Many of the objects displayed are, not coincidentally, from other sites in both Florida and found on Atlas Obscura.

The idea might have stalled if not for GISH, which is the unique creation of actor/author Misha Collins (of Supernatural fame for his role as the angel Castiel). Each year he creates a list of items that teams must create or accomplish and document over the course of a week, with emphasis on strangeness, absurdity and compassion. During the August 2021 hunt, one of the items was as follows:

Item #118: A lot of countries are in lockdown due to COVID, leaving people thirsting for roadside attractions. Fill the void: Invent an amazing roadside attraction and create it in your neighborhood. Bonus points if you get it listed on Atlas Obscura. If you can’t leave your house due to COVID or other issues, you can create this in your home, but don’t list your location on Atlas Obscura. - inspired by Monica D.

This was precisely the extra push I needed to make The Obscuratorium a reality. while initially it started on the shelf of one of the bookcases, it has made its way now to the front window where hopefully it will help make wonder more accessible and perhaps inspire others to seek it out as I have. 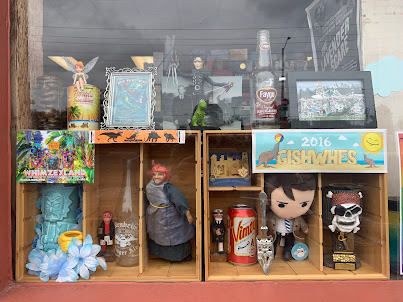 Contents (Left to Right, on Top of the Cabinets)

Contents (Left to Right, Inside the Cabinets)