Riddle Me This: How "Tampa Bay Scavenger" Came To Be

Like solving riddles? Assembling puzzles? Decrypting coded messages? Well here's a conundrum for you - when is an activity book not an activity book? That's what I'm hoping "Tampa Bay Scavenger" will solve when it comes out in just a few short weeks. There's more than one right answer to that question I've posed, and I'll give you some of them below as a means of both recounting the book's genesis and providing a deeper, more personal perspective. 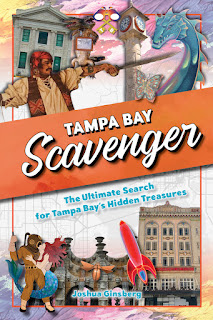 Answer: When it's a marketing idea that takes on a life of its own.

I feel for anyone who tried to release a book during the first several months of the COVID-19 global pandemic. Putting out a local travel book was especially challenging as most venues either cancelled their events or moved them to zoom and other online platforms. Thankfully, Secret Tampa Bay still met with more success than I expected, and I dug deep into my entrepreneurial bag of tricks to come up with clever and safe outdoor events. I had the idea of turning a couple dozen of the places and items from Secret Tampa Bay into a scavenger hunt, so I set about composing a series of rhyming riddles, leading people to parks, monuments and other spots throughout the area. Due to a spike in COVID cases, I was never able to get it off the ground, but I had shared the riddles with my publisher and they responded with a great deal more enthusiasm than I had expected.

"These are really good... do you think you could produce more of them?"

"Sure," I said, "I could crank out another couple dozen pretty easily..."

"How about another three hundred and forty of them? An entire book's worth?"

"Um," I really wasn't sure that either I or the Tampa Bay area could produce that many. "How long would I have?"

Ok, I thought. That's simply impossible. Even if everything aligned perfectly, which it seldom ever does, it would push me well past the far reaches of anything similar I'd ever attempted before. I couldn't suppress the grin that spread across my face - how could I resist it? "I'm in."

Of course, at that time I hadn't anticipated how quickly things change, and that I would go from covering seven counties down to just four, having to adapt and reshuffle riddles as I helped pioneer a what has become a new line of books for Reedy. Even as I raced to complete the riddles, the things and places I had written about just weeks or days earlier were demolished, removed or closed their doors for good.

In the end, it would take 12 drafts, roughly 500 riddles and something like 1,500 photos, but I did it, and whatever any critic may say about it, I am very proud of the final result, which I'm fairly certain is the largest and most elaborate scavenger hunt ever created within the Tampa Bay area.

Answer: When it's the next chapter in a larger story and another pathway back into your own childhood.

It seems to be the case in my life of late that the path forward sometimes begins behind me. With my first book, it was my desire to recapture some childhood magic and wonder following the death of my friend that set things in motion. This latest work similarly has its roots back in my past, deeper even than those memories which spawned my last book. I had to think back to a time when I would draw elaborate mazes on graph paper or take turns trying to stump friends with riddles - some from books like The Hobbit by Tolkien, and some that we created ourselves. I had to revisit that time in my early days when I would spend hours working on puzzles that provided glimpses into fantasy landscape and other worlds. I incorporated elements from roleplaying games, video games, treasure hunt movies (like "Goonies" and "Raiders of the Lost Ark") and books like "Ready Player One" and "The Thrill of the Hunt." Thus, at the age of 45, I have at last fulfilled the dream I had as a fourteen year old of being a real life dungeon master.

Answer: When it's an opportunity to explore your surroundings in a new way.

Each of the books I've produced for Reedy Press has allowed me to see and understand the place I live from a new perspective, like looking through a multifaceted gemstone, each time seeing things reflected in a new way. Secret Tampa Bay honed my ability to pick out what is odd, concealed and unusual. This time around, Tampa Bay Scavenger has enabled me to think about a place as something playable - the Tampa Bay Area as a gameboard or setting for an adventure. In short order I'll be putting on my time traveling gear to write Oldest Tampa Bay.

Answer: When it's a bridge between where you've been and where you're going.

Tampa Bay Scavenger forms both the connective tissue between Secret Tampa Bay and Oldest Tampa Bay, but also serves as its own standalone work. It can be used as an activity and scavenger hunt book, as a guidebook to the area, or even just as a 357 verse love poem to the place I live.

It also forms a bridge between my own past and future - between the person I've been and the one I aspire to continue becoming. In seeking to open up a new way to experience the area for readers, I have also opened up a whole new realm of possibilities for myself - as a writer, as a curiosity seeker and as a human being. It also marks the fist time I've connected with a cause - I'm donating a dollar from every book I sell directly (at events and through the website www.secrettampabay.com).

Creating Tampa Bay Scavenger has pushed and broadened my skills, challenged me in new ways, and unexpectedly shown me a new way forward by reaching further back into my past. I hope that it will prove every bit as challenging and compelling for everyone who chooses to explore its contents.