Memorial Day presents itself to me as a holiday with a bit of a multiple personality disorder: on one hand it's a time to remember the dead - those who lost their lives in active military service. Yet it's also the unofficial start of summer - beaches, pool parties, beer and yes, hamburgers. This last item has me reflecting not only on service members who have passed on, but also on wonders that exist now only in memory. Hence my post of this previously published piece on the Burger Museum.

Though the museum is no more, it served as one distinct stage of the evolution of "Burger Beast" who I've come to know and appreciate for his extraordinary and highly specialized expertise. He continues to blog, he has a book that you should check out, he's opened a restaurant and he keeps serving up the freshest burger-related wisdom anywhere on planet earth. Who knows - maybe one day the museum will return. In the meantime, you can always revisit it here.

This shrine to bovine consumption and all things fast food is a slice of culinary history both rare and well done. 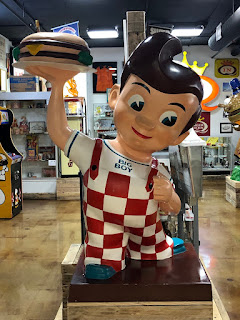 In a 1984 Wendy's commercial, actress Clara Peller carved out a permanent place in pop culture by asking, “Where’s the beef?” Some three decades later, we have a definitive answer in the Burger Museum at Miami’s Magic City Casino.

The museum, created by Sef “Burger Beast” Gonzalez, began as a blog documenting and celebrating his lifelong passion for burgers. When a friend familiar with Gonzalez’s particular obsession sent him an old Burger Chef restaurant sign, it sent him on a path toward amassing an extraordinary collection of all things burger-related. When his collection outgrew his old, unused bedroom at his parents’ house, he pitched the city’s Magic City Casino on the idea of leasing him space to showcase his fast-food fascination. The casino agreed, and in December of 2016, the Burger Museum was born. 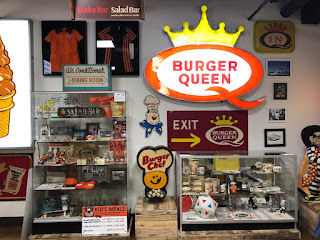 Today the collection includes over 3,000 artifacts and collectibles, not only from the larger chains such as Burger King, Wendy’s, and McDonald’s, but from lesser-known restaurants (including a sign from the failed Burger Queen chain—no affiliation with the King) and “mom and pop” shops as well. From vintage uniforms and menus to dishware, toys, and statues of mascots (the Hamburglar, of course, makes an appearance), the vast collection tells the story of America’s enduring love for the ground beef patty on a bun. 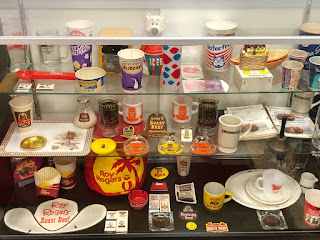 It's a lesson you might think I'd be better at by now. Looking around at my peers for comparison (something I generally try to avoid doing), it seems like many, maybe most of them  have worked out some approximation of a balanced between work, family and leisure - although it's hard to tell how much of that is real and how much is illusion. It's also easy to forget that many of them have a very different life than I do - in middle age now, most of them probably have a somewhat clear picture of how things will unfold in their ideal scenario. I, however, just upended everything again over the last few years - out the window once again went all plans and predictions. And balance. Of course, I was never great at maintaining that in the first place - no doubt part of why I gravitated to a creative project-based lifestyle - as it allowed me to hyper focus, work like mad, and then move on to the next project.. For a good ten years or so I found, if not what most would call balance, than at least some lifestyle that was workable for me and one that gave me the time and space to discover, cultivate and indulge a passion for seeking out curiosities and wonders.

Now though, in a manner truly reflective of my current home, I've introduced some new species into the delicate ecosystem of my daily life. It started with the first book, "Secret Tampa Bay," which created a new pattern, alternating between creating and then marketing and promoting, my work. With one book that was pretty simple. "Tampa Bay Scavenger" made it a bit more complicated - now producing a new book started to overlap with promoting the first. As I near completion of "Oldest Tampa Bay," I can see how this will become increasingly complex. Three books, still manageable I think. But I'm also starting work on a fourth, and in early talks about a fifth... and bit by bit, word by word, page by page, I can just start to make out the shape of a new life as an author.

The introduction of the first tour for the Clearwater Jolley Trolley opens up yet another new doorway, one that I am eager as ever to explore. Again though, this alters my trajectory and with each new opportunity, I need to go back and measure it against what's already on my plate. That's not a complaint, in fact, it really just serves to highlight the benefit of having a portfolio of endeavors rather than just one job with a clear, linear path and progression. I get to pick and choose, I just have to be smart and careful about what I commit to.

The factor that most blindsided me though, the one I didn't see coming, was COVID-19. Jen and I both got it back in March of this year, despite having been vaccinated and boosted. It wasn't too bad for us, no worse than a mean flu. Most of our symptoms resolved after a few days - some hung on for weeks (in the form of a secondary sinus infection), and one has continued to linger for months now. Exhaustion, fatigue, whatever you want to call it. I've been feeling like an old cell phone that suddenly has a smaller battery capacity, can't seem to fully charge anymore and loses that charge much faster than it used to. For the first time in my adult life, naps have become not just a regular feature but a necessity.

I was starting to wonder if maybe there would be no bounce-back. Maybe old age just showed up early and I'd have to get used to it. Just when I was starting to give up hope, something amazing happened the other morning. I woke up feeling rested. For the first time in months, I actually felt my energy at a pre-COVID level. So there's hope that things will improve, but in the mean time, I've had to learn some new tricks:

Making these changes has been tough, but I think I am ultimately better for it. As my energy level returns, little by little, I plan to hold on to what I've learned. It will make me more efficient, it will allow me to focus on fewer things, thereby increasing their quality, and it will also allow me to increase the quality of my own life.

Certainly the experience could have been worse - I am, after all, still very much alive. I did not need to be admitted to a hospital or put on a ventilator. Every moment of every day, I count myself lucky in this regard. But it hasn't exactly been a walk in the park either. Its lingering effects have reshaped my world - and I'm still trying to get my head around that. I feel like if I can learn something of value from this, it will feel like picking the pocket of the armed robber that burst into the bank and made off with my wellbeing.

It's my way to take back just a tiny bit of what was stolen.

I hope, if you need to, that you can do the same.

Posted by Joshua at 4:51 PM No comments: