Is it really any surprise that a man dedicated to indefinitely prolonging his own childhood should end up living down the road from the Magic Kingdom with a diminutive, non-human companion named Tinker Bell?

I'll admit it, I haven't always had the easiest time making commitments.This is evidenced by the fact that it wasn't until my mid 30's that I got married, and it is only now in my 40's that I've become the newest convert to the religion of dog ownership. 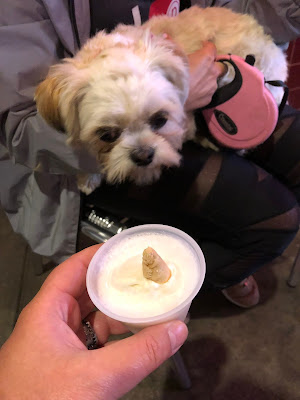 Tinker Bell having a complimentary "puppy sundae" from Leopold's in Savannah, GA

I was reluctant. I hemmed and hawed and kept putting it off, but Jen was insistent. Having grown up with a Shih Tzu named Wonton, she made a compelling and heart-felt case for the necessity of having one here in Florida. For my part, I balked at the cost, at the commitment, at having to wake up at three in the morning to take her out in the middle of a storm, at all of the reasons you can think of not to have a dog. And then, after playing for just five minutes with a spunky, curious little ball of fur that wasn't quite two months old, I melted.

Maybe it's a bit of karmic retribution for having given my mother such a hard time about spending more time and affection on canines than on humans. Her own dogs, Portuguese Water Dogs and Chesapeake Bay Retrievers, have collectively earned more titles and initials following their names than I will ever possess in ten lifetimes. But having now spent nearly two years with Tink, it is no hyperbole to say that her company has flipped my perspective on the matter and also transformed my daily life here in Florida for the better. In short, I get it. 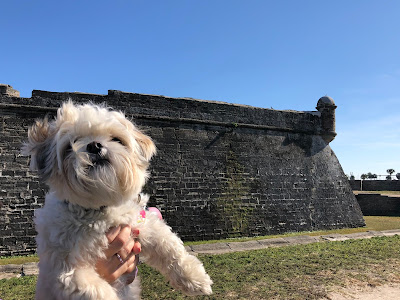 Since leaving corporate america to work for myself, from a home office, nearly ten years ago, it can get a little bit lonely at times. Isolation is a real challenge. But Tink gets me outside, interacting with the world outside my cave/tower. And more recently Jen and I have been taking her on our trips - Initially just within Florida but over the past year also to Savannah and Atlanta, and in the future probably all the way up north to Philadelphia. Our general rule is that anywhere we drive, we take her with.

Traveling with a canine companion (or "your royal fluffiness" as we sometimes refer to her) requires a bit of extra planning in terms of where we stay and what activities we bring her with for. Some hotels charge a pet fee, not typically more than $25, and we scout out doggie day care facilities so that we can give her time to play with friends while we explore museums and other places that aren't dog friendly. And we bring a folder with her medical records as proof that she's up to date on all of her shots. With this little bit proactive planning, the southeast has been surprisingly pet-friendly. 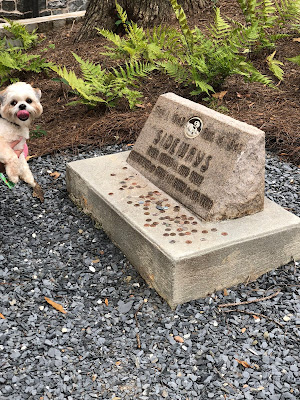 Tinker Bell paying her respects at the grave of Sideways the Dog in Atlanta.

We've even started looking for thematically relevant stops along the way - monuments to famous dogs and such. Tink's a remarkably well-behaved traveler as well. She loves the car - sleeping contentedly on Jen's lap for hours at a time. She's surprisingly adaptable regarding her food, not always the case with Shih Tzus from what I've heard. Jen's previous dog, Wonton, for example, turned her snout up at anything other than boiled chicken served to her on a napkin placed on Jen's parents' bed.

Can it be taken too far? I've read some travel articles that suggest some travelers would prefer that others leave their pets behind, and I understand and respect that point of view (hence the research into pet-friendly hotels and activities). Thankfully Tink isn't "typically" prone to late-night barking fits or other behaviors that would create a disturbance (all the same, we always have plenty of treats and a couple toys on hand for her). If/when bringing a pet impinges on the enjoyment and experience of others, than yes, boarding might be a better option. Should my travels with Tinker Bell ever prohibit Jen and I from exploring any of the items on our adventure lists or deter us from interaction with other humans, then it might be time to rethink things. Lastly, I've informed friends and family that should they see me pushing Tink in a stroller, I invite them to set up folding chairs in a semi-circle in my living room for a "friendly chat." 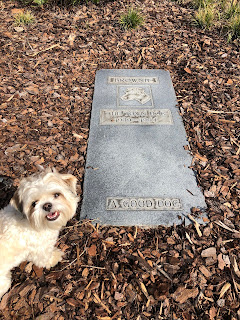 As I write this, Tink is curled up by my feet, waiting for me to finish my post so that I can get on to the day's more pressing matters which include belly rubs, playing with squeak toys and a long walk. Maybe chasing some squirrels and lizards up trees.

On a final note, I should mention that in addition to being my friend and companion, Tinker Bell is also my editor - any misspellings or errors in this post or others are hers entirely. 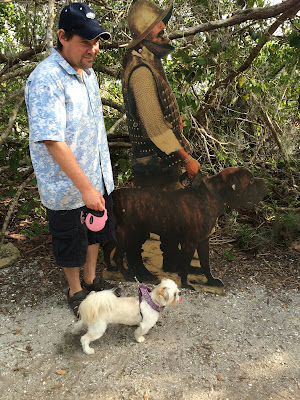 Tinker Bell and I at DeSoto National Memorial.
Posted by Joshua at 6:47 AM No comments:

Exploring New York: Shadows of the Original Trial of the Century

The man whose architecture ushered in the American Renaissance would ultimately come to symbolize decadence.

When I mention "the Trial of the Century" people generally assume I'm talking about the OJ Simpson trial, and the name Stanford White doesn't usually mean very much to them. It should though (and if it doesn't anything to you either, I encourage you to read "The Girl on the Velvet Swing"). You see, long before a back Ford Bronco made its famous dash for the border and into our shared consciousness, there was another "Trial of the Century." On the surface these two trials have a lot in common, both featuring the fall of prominent public figures, jealousy, murder and subsequent media frenzies. But scratching the surface reveals very different stories.

Stanford White seems to have had two passions. The first, for architecture, is the one that brought him wealth and fame. The second, for sexual deviance with an emphasis on corrupting young women, is the one that got him murdered - shot three times at point blank range during a play at the old Madison Square Gardens by Harry Thaw, who claimed that White had ruined his wife, model and actress Evelyn Nesbit. Spectators at first applauded, thinking it was one of White's pranks, but after a few moments, once they realized what they had just witnessed, panic erupted.

I'll leave off there, as the purpose of my post isn't to rehash the sordid story, which you are more than welcome to explore elsewhere. Rather, I wanted to see what remnants of White's rise and fall I could find in and around Midtown Manhattan. 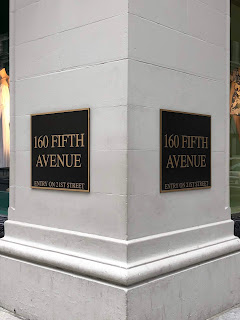 I started off by walking to 160 Fifth Avenue, the old offices of McKim, Mead and White. J.P. Morgan, the Astors and the Vanderbilts were just a few of the many prominent clients served by the firm. Other projects included the triumphal arch at Washington Square, the Cable Building, the Bowery Savings Bank, the Judson Memorial Church, the Gould Memorial Library and the same Second Madison Square Garden where White met his end. One can imagine in the days following White's murder, his partners rummaging through his desk full of drafts and documents, seeking out any incriminating evidence that could damage the reputation of the firm and their own careers. Today though, you won't find any traces of the once great firm at what used to be their offices - just a Club Monaco on the first floor.

From there I took a short walk to 22 West 24th Street, which was the site of White's sex crimes. What Nesbit once described as a lavish love nest with heavy re velvet curtains as well as the infamous swing with red velvet ropes and ivy-styled green similax, is today just a gap between buildings. 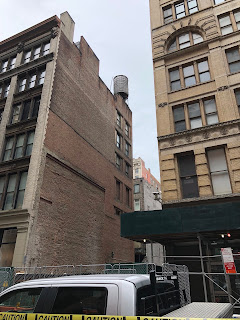 Not finding any remnants of the seedier side of the story, I turned my attention instead to the higher qualities of White's legacy, with a visit to Washington Square Arch in Greenwich Village. Modeled after the Arc de Triomphe to commemorate the centennial of George Washington's presidential inauguration, it is the structure for which White should be most remembered for, according to his great-grandson.

There's one other physical trace of White's story, which I plan to see in an upcoming visit, not to New York but to the Philadelphia Museum of Art, to see the Golden Gal of Old Madison Square Garden. Once marking the highest point in the city, the nude statue of Diana with her bow drawn, is all that remains of the Beaux Arts masterpiece that White brought to life - and the very same building in which his own life ended violently.
Posted by Joshua at 8:35 PM 2 comments:

The first custom-designed building to showcase the works of Dale Chihuly is a wonderland of glass and light.

A world-renowned pioneer in the studio glass movement, for more than 40 years Dale Chihuly has created innovative, organic and large-scale glass artworks and installations. In 2017, the collection moved to a new space and the first building custom designed around the artist’s work. 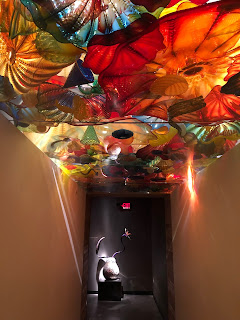 Visitors enter the main body of the 11,000 square foot collection through a hallway of the artist’s works, which is not unlike wandering through a kaleidoscope.

On display are several massive chandeliers that look somewhat like a colony of crystalline giant tube worms decided to celebrate Mardi Gras together. Other works featured include the icy, electric blue Tumbleweeds suspended in its own room, the Macchia Forest of organic bowls and the bright, celebratory Mille Fiori as well as various Ikebana and Niijima Floats. 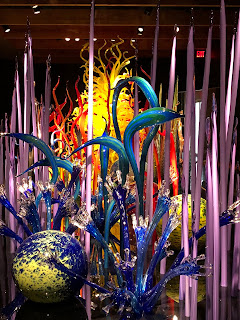 Also on display are many of the artists’ works on paper, as well as pieces from both his Sea Form and Venetian series. Interestingly, one of those Venetians on display was once stolen from the collection, only to be returned the following day in a crude, taped-up box. The work was unharmed, but it had also been wiped clean of any fingerprints and at the time of this writing, the case remains unsolved.

Know Before You Go
A thirty-seat theater runs a loop of interviews and information about the artist and some of his more well-known installations around the world, and the gift shop has original works available for sale. Tickets for the collection are also good for a free glass blowing demonstration across the street at the Morean Glass Studio & Hotshop. 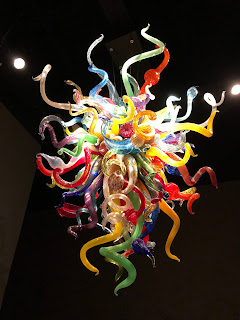 Posted by Joshua at 9:21 PM No comments: