A hurricane-stricken oak tree has been reborn as a beautiful chainsaw artwork.

Not to be confused with the nearby Singing Oak tree in New Orleans’ City Park, the “Music Tree” does not make any music but rather pays tribute to it. This dead oak at the south end of Bayou St. John has been reborn as beautiful chainsaw artwork. 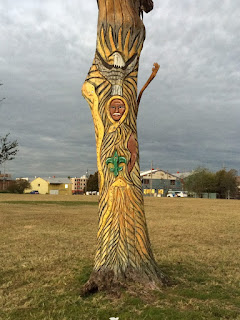 The tree survived the water and wind of Hurricane Katrina only to be struck and killed by a bolt of lightning in 2012 during Hurricane Isaac. At the behest of the organizers of New Orleans’ annual Mid-City Bayou Boogaloo, master chainsaw artist Marlin Miller set about transforming the tree after its unfortunate fate.
Miller carved snakes, a fleur de lis, a phoenix-like eagle, guitars, a piano keyboard, and a pelican into the trunk of the tree. The gnarled branches became birds in flight. He drew from the area’s history for inspiration, specifically when the bayou served as the entryway for the French founding fathers of the city some 300 years ago—a passage likely witnessed by the old oak tree.

Know Before You Go
The tree is easily visible most of the year. It stands alone by the intersection of Orleans Avenue and Bayou St. John. For one weekend each year, however, the shores are packed with visitors to the city's music festival. 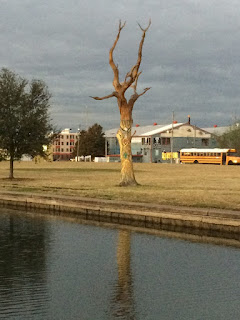